In early 1860, Abraham Lincoln was a little known regional politician from Springfield, Illinois. The Republican Party was new, and had failed running national hero John C. Frémont for president in 1856. Abraham Lincoln chances of ascending to the presidency under the Republican banner were slight. All that changed in New York City on February 27, 1860. That afternoon, Lincoln had his photograph taken by Mathew Brady, and in the evening, he gave a historic speech at the Cooper Union. Lincoln often said that Brady’s photograph and his Cooper Union address propelled him to the presidency.

Below is a highly abridged version of Lincoln’s speech.


“We hear that you will not abide the election of a Republican president! In that event, you say you will destroy the Union; and then, you say, the great crime of having destroyed it will be upon us!

“That is cool. A highwayman holds a pistol to my ear, and mutters through his teeth, ‘Stand and deliver, or I shall kill you and then you will be a murderer!'

“What will convince slaveholders that we do not threaten their property? This and this only: cease to call slavery wrong and join them in calling it right. Silence alone will not be tolerated—we must place ourselves avowedly with them. We must suppress all declarations that slavery is wrong, whether made in politics, in presses, in pulpits, or in private. We must arrest and return their fugitive slaves with greedy pleasure. The whole atmosphere must be disinfected from all taint of opposition to slavery before they will cease to believe that all their troubles proceed from us.

“All they ask, we can grant, if we think slavery right. All we ask, they can grant if they think it wrong.

“Right and wrong is the precise fact upon which depends the whole controversy.

“Thinking it wrong, as we do, can we yield? Can we cast our votes with their view and against our own? In view of our moral, social, and political responsibilities, can we do this?”

The hall burst with repeated shouts of “No! No!”

“Let us not grope for some middle ground between right and wrong. Let us not search in vain for a policy of don’t care on a question about which we do care. Nor let us be frightened by threats of destruction to the government.”

“Let us have faith that right makes might, and in that faith, let us, to the end, dare to do our duty as we understand it!”

When Lincoln stepped back from the podium after this dramatic conclusion, the Cooper Union Great Hall exploded with noise and motion. Everybody stood. The staid New York audience cheered, clapped, and stomped their feet. Many waved handkerchiefs and hats.

If you want to see how a principled politician gained national repute with honor and integrity, I recommend Lincoln at Cooper Union by Harold Holzer.  You might also enjoy the Lincoln historical theme I used in my contemporary thriller, The Shut Mouth Society. 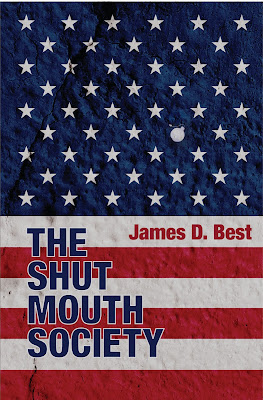