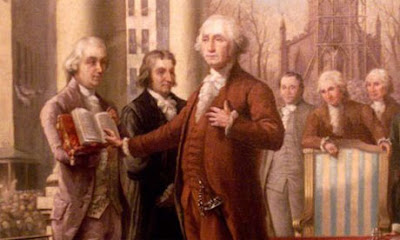 The following essay was first published in Constituting America.

George Washington won the first presidency under the newly established Constitution. He ran unopposed, professed not to want the job, and remained for the most part at Mount Vernon, yet won unanimously. Many believe he never campaigned, but instead acquiesced to a call to duty from his countrymen. Perhaps it was not so simple.

People think of Washington as a man of honor who won a war through strength of character and perseverance, and as a president who didn’t cling to power. From our perspective in time, he appears etched-in-marble and stiff as a board. Washington was tall, stately, reserved, and preoccupied with his reputation, but he also loved to dance, play cards, socialize over meals, and attend the theater. He was a superb horseman, ran his plantation with a sharp eye for profit, and attended church regularly. Washington was a vibrant, athletic man who wanted most of all to be loved by his countrymen.

Washington was the preeminent politician of his age and maintained good relationships with all the significant people in the country. To say he didn’t campaign for the presidency is to ignore decades of relentless politicking. (When Dwight Eisenhower was told he was not a politician, he replied that no one could become General of the Army without being a politician.) Washington bragged he never ate alone, made sure he was a central figure in all the founding events, collected a cadre of bright and capable people, and understood branding well before Madison Avenue had a clue.