A Tale of Serendipity 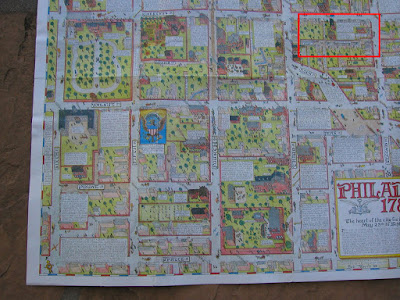 I took historical accuracy seriously when I wrote Tempest at Dawn. I not only read dozens of books about the Constitutional Convention, but studied books on Eighteen Century lifestyle and technology; Philadelphia, New York, and New Haven; the international scene; and numerous biographies of the principle Framers of the Constitution. I also made numerous visits to New Haven, New York, Mount Vernon, Montpelier, and Philadelphia as part of my research.

The events and locations outside of the State House were as accurate as I could portray them. Two major venues in the book were the Indian Queen and City Tavern. (City Tavern remains intact, but alas, the Indian Queen is long gone.) In my penchant for accuracy, I tried to lodge the delegates in the appropriate Inns, homes, and taverns, but I couldn’t find where Roger Sherman stayed during the convention. After looking at every source I could find, I finally decided I would need to make something up. He was not rich, so he would probably stay at a boarding house. I used my wife’s maiden name and put him in a room at Mrs. Marshall’s boarding house. This was a fictional contrivance, but not my only one. I left my other protagonist, James Madison, at the upscale Indian Queen for the duration of the convention when he actually moved elsewhere at some point for privacy.