“The question is, not what rights naturally belong to man, but how they may be most equally and effectually guarded in society.” Roger Sherman 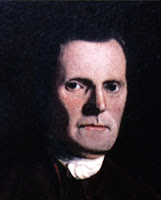 Sculptors haven’t chiseled a lot of marble to honor Roger Sherman, yet he was one of the most important of the Founding Fathers. He was the only Founder to sign all the major documents of the era, and he was on the final committees for the Declaration of Independence, Articles of Confederation, and the Constitution. At the Constitutional Convention, Sherman proposed and engineered approval of the Great Compromise which gave each state two senators. He was an ally of James Madison in the First Congress and instrumental in guiding the Bill of Rights through the congressional quagmire.

Sherman was a small businessman who had once owned two general stores, but he became impoverished because he invested his life savings in Connecticut bonds to support the Revolution. Throughout his life, he was a major benefactor of Yale, acting as the university’s treasurer for many years and promoting construction of a college chapel. After ratification of the Constitution, Sherman was first a congressman and then a senator for a short period before his death.

What did his contemporaries think of him?

Thomas Jefferson said: “That is Mr. Sherman of Connecticut, a man who has never said a foolish thing in his life.”

John Adams called him a best friend and “one of the strongest pillars of the revolution.”

An opponent complained that, “he is cunning as the devil and if you attack him, you ought to know him well. He is not easily managed, but if he suspects you are trying to take him in, you may as well catch an eel by the tail.”

William Pierce, in his constitutional notes wrote, “He deserves infinite praise, no man has a better heart nor a clearer head. If he cannot embellish he can furnish thoughts that are wise and useful. He is an able politician, and extremely artful in accomplishing any particular object; it is remarked that he seldom fails.”

Fisher Ames, a fellow congressman, said, “If I am absent, during the discussion of a subject, and consequently know not on which side to vote, I always look at Roger Sherman, for I am sure if I vote with him I shall vote right.”

Patrick Henry said he was one of the greatest statesmen he ever knew.

And George Washington always visited his home when he was in New Haven.

If his contemporaries thought so highly of Roger Sherman, why do we hear so little about him today? Part of the reason would be his age. At the Constitutional Convention, he was sixty-six, and he died before Washington finished his first term. We tend to forget our history between independence and Washington’s inaugural, which was when Sherman contributed the most. He was also a terse, ineloquent speaker leaving few memorable quotes. (There are a few gems, however, like, “When you are in the minority, talk; when you are in the majority, vote.”)

Roger Sherman was a devout Christian and insisted on Constitutional protections of state rights—two subjects unpopular with some historians. Many modern political thinkers believe most of the bad things that have happened in our domestic history were done by the states, and the national government must exert heavy control over the states for the good of the people. As a result, they have diminished the protection of state rights that Sherman and his fellow delegates built into our constitutional system. This is a miscalculation. Abuses occur at every level of government. The Founders understood that government is power and power corrupts. They wanted the federal government to check abuses at the state level, but they equally wanted the states to check runaway national power.

In his day, Roger Sherman was called the old puritan, and he was outspoken about his faith. Many today would dismiss this as not only quaint, but offensive to those of other faiths and non-believers. Sherman was unembarrassed by his faith, but nobody in his time thought that was unusual. If he returned today, he would be probably be appalled at the machinations we go through to create religiously sterile public areas.

Roger Sherman was revered by his contemporaries and an omnipresent patriot during our founding. He was essential to the revolution, the Constitutional Convention, and the Bill of Rights. To learn the lessons of the origins of the American Republic, it is necessary to restore all of the Founding Fathers to their rightful place of honor.