“Our new Constitution is now established, and has an appearance that promises permanency; but in this world nothing can be said to be certain, except death and taxes.” Benjamin Franklin

During the second half of the eighteenth century, the United States was blessed with numerous renaissance men.  Thomas Jefferson was a planter, architect, revolutionary, author, agricultural scientist, inventor, and politician, among other things.  George Washington started life as a surveyor, but then became a successful planter, military commander, politician, entrepreneur, and agricultural innovator.  Many of the Founders were equally skillful at multiple endeavors.  None, however, compared with Benjamin Franklin. 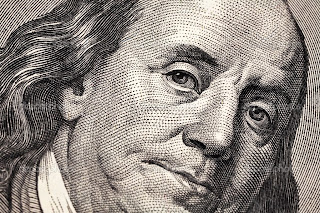 Franklin’s humorous aphorisms are so embedded in our culture and he’s been caricatured so often, we sometimes think he must have been the class clown of the Revolution.  Nothing could be further from the truth.  Franklin was arguably the second most important person in securing our independence.  Despite Washington’s greatest efforts, our domestic military and treasury could never have defeated the British Empire.  We needed help.  Franklin did more than flirt with the ladies in Paris, he charmed a nation in order to gain access to the French court.  The thing to understand about Franklin is that everything he did had a purpose.  Once granted access to the back rooms of Versailles, he did the impossible and got the United States desperately needed money, warships, and international legitimacy.

Franklin started life as a printer’s apprentice, and ended up exceptionally wealthy.  Michael Klepper and Robert Gunther rank him in the top 100 in The Wealthy 100: From Benjamin Franklin to Bill Gates – A Ranking of the Richest Americans, Past and Present.  How did he do it?  With two grand entrepreneurial moves. He nearly invented the concept of franchising, setting up print shops in cities outside Philadelphia that were as standardized as H & R Block.  But the real money came from his realization that content ruled.  Printers typeset other people’s material, but Franklin went beyond this standard practice and published a newspaper, books, and Poor Richard’s Almanac.  For nearly the entire twenty-five years of its publication, Poor Richard’s Almanac was the country’s #1 bestseller after the Bible. If Franklin had been born in 1960, he’d probably have clobbered Bill Gates, Larry Page, Sergey Brin, Mark Zuckerberg, and Steve Jobs.

Franklin invented bifocals, the Franklin stove, the lightening rod, a urinary catheter, swim flippers, a Glass Armonica, an odometer, and several other devices.  It’s generally forgotten that he was a world-class scientist in his day, especially renowned in Europe for his scientific achievements.  His famous kite flying episode was not a lark, but an experiment to confirm a portion of his well-developed theory of electricity.  He was the first to map the Gulf Stream, which gave him something scientific to occupy his mind during his eight voyages across the Atlantic.
In 1727, Franklin founded a philosophical organization called the Junto.  This civic minded group led to Philadelphia being the home of the nation’s first volunteer fire department, public hospital, public library, and numerous other improvements that all had Benjamin Franklin’s strong imprint.  Franklin transitioned the Junto into the Philosophical Society, the first learned society in the country.
Benjamin Franklin played a crucial role in all three phases of our nation’s Founding.
In the first stage that built a consensus toward independence, he mirrored many people in the colonies.  He was initially a loyalist, but as an informal envoy to England, he changed his mind when he found Parliament intractable.  When scolded by a British courtier, he told him, “I will make your master a little king for this.” Despite his jovial image, Franklin could hold a grudge, and he made those who slighted him or his country pay for their transgressions.  He returned from England to help Jefferson write the Declaration of Independence.

During the second phase, which was war, Franklin did what the Continental Congress could not do—he delivered money and armed forces to Washington.  He got them from France, while politicians at home bickered endlessly.
The third phase represented the real nation-building. That was when the Federal Convention wrote the Constitution of the United States.  This convention was at times so acrimonious that the delegates almost scattered like a flock of disturbed seagulls.  Each time the convention edged toward collapse, Franklin was the one that lightened the tone through humor, calls for help from the Almighty, or merely filibustering until tempers abated.  Franklin did not add much substance to the constitutional design, but he held the delegates together in the State House until the design was complete.  It was a unique role that no one else could fill.

Benjamin Franklin built things to last.  The American Philosophical Society still resides next to Independence Hall.  Poor Richard’s Almanac and his autobiography remain in print.  The Philadelphia Contribution for Insurance Against Loss by Fire that he helped found still sells fire insurance.  The University of Pennsylvania and the Pennsylvania Hospital still exist. On leaving the convention after the signing ceremony, a woman asked what type of government the delegates had designed.  Franklin responded, “A republic, ma’am, if you can keep it.”

His greatest worry was the long term upholding of the Constitution.  If he returned today, he would probably warn us to never let our priceless heritage slip away.  His jovial image would not disguise his anger at those who flippantly discard the work of his friends.