A Capacity to Annoy or Injure

“There is not a syllable in the plan [the Constitution] which directly empowers the national courts to construe the laws according to the spirit of the Constitution.” Alexander Hamilton, Federalist 81

During the Constitutional Convention and state ratification conventions, the judiciary was the least discussed branch of the national government. From a design perspective, almost all of the debate and alarm seemed to have been focused on the executive and the legislature. The simplest explanation is that the judiciary was familiar and non-controversial. Hamilton wrote in Federalist 78, “[T]he judiciary, from the nature of its functions, will always be the least dangerous to the political rights of the Constitution; because it will be least in a capacity to annoy or injure them.”
Every delegate knew what a judge did and understood their role in the government, and their only concern was insuring their independence. A few anticipated that judges might legislate from the bench, but most of the delegates were more concerned about politicians putting undue pressure on judges. The Framers solution to this threat was to give justices life tenure. 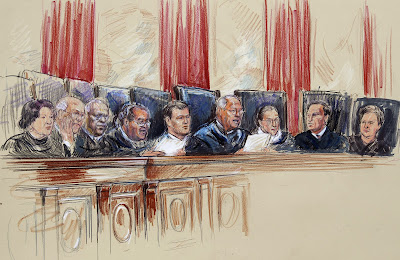 For nearly one hundred and fifty years, the Supreme Court restricted itself to evaluating laws based on what today would be called an originalist perspective. The Commerce, General Welfare, and Necessary and Proper clauses and Bill of Rights were interpreted on a generally narrow basis. The court took the enumerated powers seriously, showed deference to state authority, and restricted interference with contracts.


During these first years, the court generally did not go out of its way to discover new rights, but enforced rights specifically called out in the Constitution—with one tragic exception. After 1868, the Supreme Court permitted racial segregation to deny rights to Americans that were unequivocally full citizens as declared by the 14th and 15th Amendments. This shameful behavior by the court was a serious example of the Supreme Court kowtowing to public opinion and political pressure. The country should have taken greater notice because the court’s turning of a blind eye toward this violation of the Constitution was a harbinger of things to come.

The Supreme Court abandoned self-control during Franklin Roosevelt’s terms in office. In a 1935 letter to a Congressional committee chairman, Roosevelt wrote, “I hope your committee will not permit doubts as to the constitutionality, however reasonable, to block the suggested legislation.” At first, the court resisted the constitutionally expansive programs of the New Deal, but later became collaborators with Roosevelt by acquiescing to his desire to ignore Constitutional limits.

In an ideal world, a justice would hold up a law against the Constitution, and rule if it is in compliance or not, with a simple up or down vote. This ruling should be based on the clear wording of the Constitution, with perhaps a look at the debates and ratification process to discover the intent of a document meant to bind the government to strict rules of behavior. Another consideration might be precedents set by prior courts, but these rulings should be secondary to the Constitution—after all, both conservatives and liberals can point to dreadful decisions by the Supreme Court.

Unfortunately, the United States does not live in this ideal world. Today, judges revise laws by using inventive interpretations of the Constitution. (In his later years, Rexford Tugwell, a Roosevelt advisor, called it “tortured interpretation.”) Unsanctioned revisions have expanded Federal authority over people, states, corporations, and organizations.

Most of the delegates to the Constitutional Convention saw the judiciary as a great check against the abuse of power by the national government. In a speech proposing the Bill of Rights to the House of Representatives, Madison said, “If they [rights] are incorporated into the Constitution, independent tribunals of justice will consider themselves in a peculiar manner the guardians of those rights; they will be an impenetrable bulwark against every assumption of power in the legislative or executive; they will be naturally led to resist every encroachment upon rights expressly stipulated for in the Constitution by the declaration of rights.”

Madison was wrong. The Supreme Court has been an accomplice, not an impenetrable bulwark against assumptions of power by the legislature or the executive. Neither has the court resisted “every encroachment upon rights expressly stipulated for in the Constitution.” Instead, the court has denied stipulated rights, and went out of its way to protect unstipulated rights. Liberty depends on the rule of law, not the whim of a tribunal.

Getting Back to Basics

Restoring the Constitution won’t be easy … or quick. For one thing, the selection of a Supreme Court Justice has become a highly charged emotional event. It’s instructive that political movements spend an inordinate amount of resources influencing Supreme Court nominations, and hyperventilate when fighting a nomination they don’t like. Everyone knows that these are enormously powerful individuals—with life tenure. Everyone also pretends their candidates are impassive judges that measure every decision by the law. If that were so, no one would care who sat on the bench.

The only way to repair our Constitution is with justices that have a deep-seated loyalty to the founding principles. Since presidents typically appoint based on political leanings, it will be up to the Senate to advise the president on acceptable candidates, and then consent only to candidates that can show a life’s work of being faithful to the Constitution. If Constitutional integrity is going to be restored, the weight of the task will be on the Senate.