“It is to be remembered that the general government is not to be charged with the whole power of making and administering laws. Its jurisdiction is limited to certain enumerated objects”  James Madison, Federalist 14 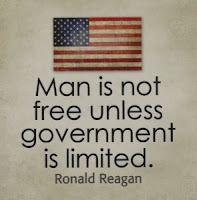 The Founders did not trust unrestrained government. Their own experience and study of history taught them that overly powerful governments invariably turned oppressive. But they also knew government was necessary. In fact, they knew they needed a government stronger than the one they had at the beginning of our nation. By the time the Constitutional Convention convened in May of 1787, a consensus had developed that the Articles of Confederation were severely flawed, but there was uncertainty about what kind of government could sustain a republic through the ages. They knew it couldn't be too weak, but it also couldn't be too strong.

The Founders did not seek a Goldilocks government. Instead they designed an elaborate set of checks and balances so they could give the government enough power to govern, while harnessing it with Lilliputian ropes to hold it in place so it wouldn't trample the little people. From our high school civics class we learned about the checks and balances between the three branches, but teachers seldom mention the intended check of the national government by the states. Nor were we taught that the Founders wanted our national leaders selected and elected by different means as yet another check on a runaway government. Lastly, the Constitution itself was supposed to be the premier check to prevent our government from becoming oppressive.

Madison's most heartfelt belief was that all political power emanated from the people. Thus, a constitution was a written contract between the people and its government. At the conclusion of the Constitutional Convention, he rejected sending their work to Congress or the states for approval, and instead convinced the delegates that the Constitution had to be sent directly to the people for ratification. After initial approval, the Founders believed the Constitution could only be changed through the amendment process. If authority was assumed beyond the enumerated powers without an amendment, it would be an usurpation of power—power that rightfully belonged to the people.

Like Gulliver, our behemoth national government has shrugged off one constraint after another until there are no practical limits to its power. The Constitution itself has been made impotent by defining it as a living document. All three branches regularly overstep their boundaries as if each were given unchecked authority. State legislatures no longer elect Senators, and the Electoral College is under attack. The general welfare, commerce, and necessary and proper clauses have been use to circumvent the enumerated powers.  No lawyer believes in a living commercial contract, yet many of these same people believe the Supreme Law of the Land is not really binding on any of the parties.

As a result, the national government has few acknowledged constraints. We have diverted from the intent of the Founders. In 1791, James Madison told Washington that “to take a single step beyond the text would be to take possession of a boundless field of power.”  He then recommended that the government, “keep close to our chartered authorities.”

We have meandered away from these basic tenants. It has not been a successful trek. The deficit is an astonishing $19+ trillion. Interest costs are consuming an ever larger percentage of the national budget, and will skyrocket when interest rates return to historical norms.

These numbers represent the real clear and present danger to our republic.