Ryan Cooper has an opinion piece in The Week with the provocative title, "America's Constitution is terrible. Let's throw it out and start over."

He starts by saying, " The American Constitution is an outdated, malfunctioning piece of junk — and it's only getting worse."

What's wrong, you say? Well, that damned parchment is interfering with him and his cohorts from governing in the fashion they believe best for all of us. How will we ever turn the United States into a European country with that odious “piece of junk” in the way?

He has a prescription, of course. As the intellectual equal of James Madison, Alexander Hamilton, Benjamin Franklin, et al, Cooper defines five brilliant changes to our countries most sacred document.

The first two aren’t even part of the Constitution and the fifth is a lazy redundancy unbefitting a professional journalist. Edicts one and two can be changed by the revered legislature that Copper wants to give additional powers. After tossing away the chaff, neutering the senate and having the house elect the president are the only substantive changes. Both of these are designed to reinstate the Articles of Confederation.

Really? Talk about ineffectual relics. Aping a European parliamentary system will not bring Cooper his progressive paradise. We already tried that.

Before exclaiming from the rooftops that the grass is greener on the other side of the pond, Cooper ought to start by explaining what’s wrong with balanced power, where each branch of government has checks on the other branches. First show why this basic principle is wrong. Before we “throw the entire Constitution in the garbage,” convince us that this idea from The Enlightenment and Age of Reason is poorly thought out and incorrect.

We know a restrained government hinders lawmaking—or social progress, as some might call it. Our society is defined by the general populous, not a self-defined elite. Cooper states that the Constitution as written, "makes changing anything nearly impossible.” Not so. Not when the general populous agree. We’ve proved twenty-seven times that the Constitution can be changed. Cooper is only piqued that his brilliant ideas have insufficient popular support. Cooper can’t win within the confines of the rule book, so he demands that we adopt his rules.

Ryan Cooper seems to fall within that category.

You might also like: Is the US Constitution Viable in the 21st Century?
You can learn about how the Constitution was written by reading Tempest at Dawn 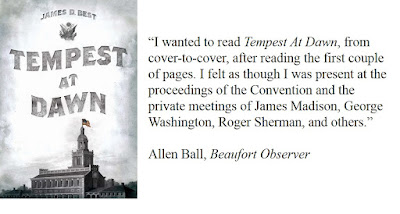