Rendezvous with Destiny: Ronald Reagan and the Campaign that Changed America By Craig Shirley 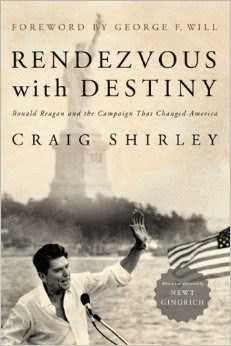 Theodore White in his book In Search of History wrote, "Threading an idea into the slipstream of politics, then into government, then into history... is a craft which I have since come to consider the most important in the world." This was Ronald Reagan's gift ... and it is a rare gift indeed.

I grew up enthralled with Theodore White’s Making of the President series. Shirley’s book does not measure up to White, but that has more to do with White’s mastery than with Shirley’s shortcomings. With White no longer with us, I’m glad Shirley has picked up the mantle—at least for Ronald Reagan’s campaigns.

This is a thoroughly researched book, with a 32% of the contents dedicated to notes, bibliography, and acknowledgments. Rendezvous with Destiny offers a blow by blow narrative of the 1980 presidential campaign. And there were some roundhouse slugfests to be sure.

Although told more from of a Reagan perspective, Shirley tries to describe the ups and downs, successes and failures of Reagan’s and Carter’s campaigns with the disinterest of an impartial observer. Perhaps Rendezvous with Destiny would have been a better read if Shirley had allowed his inner-Reagonite to cut loose a bit more. The book’s major failing is that it does not present new or deeper insights into Reagan’s character. For example: the reader does not learn how much the candidate interjected himself at key moments in the campaign. I suspect Reagan personally corrected the campaign course much more than Shirley was able to document with authoritative citations. Here and there, properly noted guesswork and opinion might have raised the drama of the story closer to how it was felt by the participants.