Would Divided Government Have Surprised the Founders? 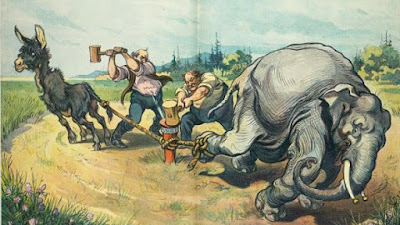 Recent events in Washington make you wonder if anyone can get along inside the Beltway. It’s not just Democrats versus Republicans—now Democrats war with Democrats and Republicans war with Republicans. And all of them seem at odds with those of us in the hinterlands. Washington is getting like the Middle East without the beheadings.

Are the Founders’ at fault for government dysfunction? Garrett Epps thinks so. In an illogical piece in The Atlantic, Epps claims the Founders never anticipated a divided government. He wrote:

I’m trying to illustrate a dangerous weakness of our system, one that the Framers clearly did not foresee. Many of them believed there would not be political parties in the new system. Others no doubt thought that the government they had designed would consist of a Congress that met for a month or so every December and a president who would supervise a slumbering bureaucracy the rest of the year. Some of them assumed the president would be a passive figure, administering directions from Congress; others imagined a chief executive with some of the majesty of the king of England. I don’t think any of them anticipated that the two branches would ever clash over which represented "the will of the voters."

Epps teaches constitutional law at the University of Baltimore, but it seems he never got beyond grade school American history. (Actually, he probably knows better but hopes the rest of us have a cherry tree understanding of American history.)

First of all, none of the Founders owned a pair of rose colored glasses. These were hard core realists. Their entire design is based on placing guardrails around partisan combatants and tempering human frailty. Claiming the Founders never anticipated divided government is ignorant or disingenuous.

Historians estimate that about one third of the colonists supported a break with England, one third opposed it, and the remaining third kept their head down to avoid musket balls.  That’s pretty partisan. Jolly old Ben Franklin even became estranged from his son because they found themselves on opposite sides of the cause. Estranged is probably too light of a word since Franklin stopped G. Washington from setting his son free in a prisoner swap. Franklin and his son never forgave or forgot. Delegates to the Constitutional Convention knew ratification would be a ferocious battle, and before the convention was even over, took several actions to tilt the debate in their favor. And these men never anticipated partisanship and a divided government?

Epps further writes that “In addition, midterm elections that don’t directly affect executive power create the danger of two antagonistic governments trying to fit into one capital.”
Perhaps Mr. Epps ought to reexamine Washington’s administration. It made Lincoln’s Team of Rivals look like a Wednesday night prayer meeting.

The Founders weren’t naïve. They foresaw divided government. They lived it. Checks and balances aren’t an integral part of our government because the Founders believed everybody would get along. They put speedbumps into the system to slow down powermongers. Divided government was purposefully used to protect the liberty of American citizens. As James Madison said, “Ambition must be made to counteract ambition.” They were rooting for the two branches to clash over which represented the will of the voters.