Do readers judge a book by its title?

Everyone knows the old axiom that people judge a book by its cover, but do they also judge books by their title? I don’t know. I suspect a great title can get readers to look further, a horrible title stops further inspection, and a mediocre title doesn't influence sales one way or the other.

The Barnes and Noble Book Blog posted an article “12 Books With The Most Irresistible Titles.” Good Titles, but I always liked Lonesome Dove because it sounded intriguing. 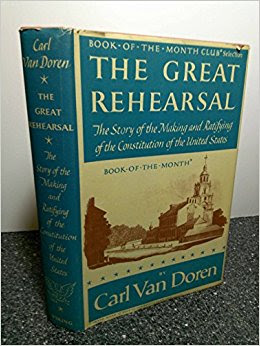 The Great Rehearsal might be the worst title I've encountered for a great book. Carl Van Doren wrote one of the top three history books on the Constitutional Convention. (In this amateur historian's humble opinion.)The book was published in 1948, when the United Nations was just starting up and Van Doren thought the 1787 Constitutional Convention was a rehearsal for writing the UN charter. This was a poor title that must have dampened sales of a fine history book.  Ironic, since the book never mentions current events except in a slapped together preface.

I've never agonized over my own titles, except for Tempest at Dawn, my own book on the Constitutional Convention. Since this was a novelization of the convention, I needed a title that didn't sound like a history book. I also liked the idea that the title reflected the turmoil in the infant country at the time of the convention.

I still like the title. Perhaps I should have agonized more over my other titles. The Steve Dancy titles: The Shopkeeper, Leadville, Murder at Thumb Butte, The Return, Jenny's Revenge, and Crossing the Animas are pedestrian. I like The Shout Mouth Society because it connotes secret society intrigue, which properly reflects the plot of this contemporary novel. Principled Action is a lousy title and may have affected sales of this nonfiction book about the founding period.

Authors may not be the best at selecting titles, but I’m not sure focus-group driven editors are better. My title for my computer technology book was Dinosaurs and Whippersnappers, but Wiley insisted on The Digital Organization. I still prefer my title.