Rights come from God, not government

“Can the liberties of a nation be thought secure when we have removed their only firm basis, a conviction in the minds of the people that these liberties are the gift of God?” —Thomas Jefferson

The Framers didn't believe rights were handed down by governments, kings, or rulers. Instead, they believed every individual was endowed by their Creator with certain unalienable rights. In their experience, governments didn't protect rights; governments threatened rights. World history had been an unbroken string of rulers suppressing rights and liberty.

Rights endowed by God was not a new concept. It went back at least to Marcus Tullius Cicero and the Roman Republic. Cicero searched for what he called natural law. 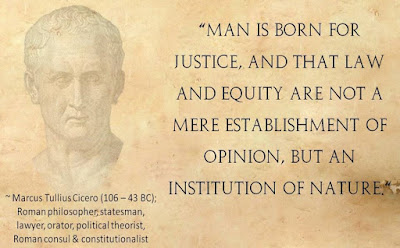 Marcus Tullius Cicero (106 BC–46 BC) on Natural Rights (abridged): “True law is right reason in agreement with nature; it is of universal application, unchanging and everlasting. There will not be different laws at Rome and at Athens, or different laws now and in the future, but one eternal and unchangeable law will be valid for all nations and all time. If so great a power belongs to the decrees of fools that the laws of Nature can be changed by their votes, then why do they not ordain that what is bad be considered good?”

John Locke and the Enlightenment magnified awareness that rights came from God. Locke wrote that humans were “by nature free, equal and independent.” 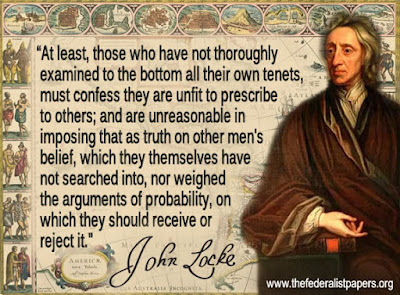 Locke’s teachings didn't mean that natural rights couldn't be suppressed. It was the exception when they were not. Thomas Jefferson said, “The God who gave us life gave us liberty at the same time; the hand of force may destroy, but cannot disjoin them.” This means that force can be used to suppress rights, but they remain intrinsically joined to our human spirit. That is why the history of the world is not only the history of despots; it’s also the history of man’s constant struggle to reassert his natural rights. John Adams agreed, “You have rights antecedent to all earthly governments; rights that cannot be repealed or restrained by human laws; rights derived from the Great Legislator of the Universe.”

The Framers had personally experienced the British government trampling their rights. They knew rights were fragile. They could be suppressed by force, gradually eroded, or simply lost through neglect. The Framers’ study of history taught them that power was the prerequisite for oppression: the more power was centralized and concentrated, the more rights and liberty were at risk.

The original Constitution included no Bill of Rights because delegates didn't believe one was necessary. When George Mason made a motion for a committee to draft a list of rights, it was unanimously defeated. In their minds, rights were not protected by words on paper, but by limiting governmental power. Before the Constitution could become the supreme law of the land, it had to be ratified by conventions of the people. The ratification debates were contentious, and success was never assured. One of the Anti-Federalist arguments that gained support was that the Constitution was flawed because a Bill of Rights was missing. Several states approved the Constitution based on a promise that a Bill of Rights would be immediately added. As a result, the First Congress proposed a set of amendments, and the states ratified ten, which we now call the Bill of Rights.

Is our Bill of Rights a list of government-guaranteed rights? No. The first eight amendments are filled with phrases like, “Congress shall make no law, shall not be infringed, shall not be violated, nor be deprived, shall not be required.” These are not a list of rights generously bestowed by a benevolent government. Instead they are a list of restriction on government. As a safety measure, they added the caveat that this was not a complete list (IX Amendment).

Thomas Jefferson artfully encapsulated the Founders’ thinking on rights: “Rightful liberty is unobstructed action according to our will within limits drawn around us by the equal rights of others. I do not add ‘within the limits of the law,’ because law is often but the tyrant’s will, and always so when it violates the rights of the individual.”

To assert that rights come from God is not to suggest that the United States should become a theocracy. It is only saying that true rights are not a social construct—in other words, they do not come from government. It should always be remembered that whoever grants a right can take it away.
Posted by James D. Best at 9:43 AM