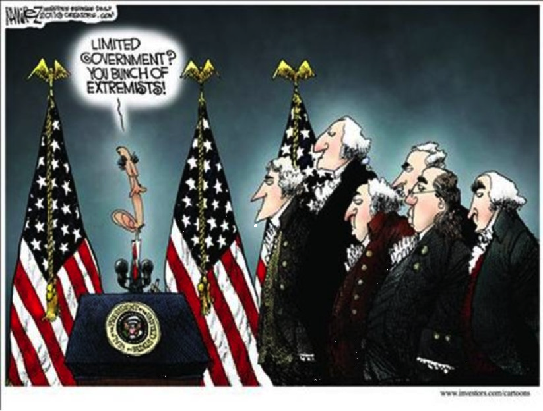 In the past, I blogged at What Would The Founders Think? One of my articles was titled, “The Founders Fear.” The article asserted that the Founders architected a limited government because they feared unrestrained power. This was written way back in 2011, but I received a scolding from a troll last week. Reeve wrote:

“As someone who has studied the Constitution, and it’s history, rather well, I gotta say, I believe you to be cherry picking parts of it to suit your ideology. The Constitution was a step up in federal power over the Articles of Confederation. Furthermore, at the time of it’s passage, there was a TON of opposition to it being too centralized. So I find the argument that the Constitution is all about limited government to be specious.

Furthermore, the Constitution does not give specifically listed and enumerated powers. It gives a broad overview of what the Founders thought the government could and should do, and it gave it the powers to do so. The very first power listed contains the authority to provide for the general welfare of society, and I’m sure you’re familiar with the necessary and proper clause. That’s hardly a specific power or desire being granted, rather it’s a broad overview of what view they believed government should do, and left it up to the people and actual representatives to agree on specifics.

The Founder feared government being used for private gains – as opposed to common gains. If the government is instituting policies that are generally good, aimed at the general population, and whose goals are not to promote one private group over another, then it more or less fell within proper governmental authority. Things like universal health care are not necessary against the Constitution, nor Welfare programs – because the goal of such programs are to promote and provide for the GENERAL WELFARE of the United States.

Oh, and it doesn’t mean individuals cannot gain from governmental policies. It just means, for example, the legislature can’t pass a law giving exclusionary rights to a certain company. Like say the East Indies Tea Company to set up shop right in Boston Harbor and avoid tariffs and other taxes.

I find it ironic that many modern “conservatives” misunderstand what the revolution was about just as much as the then-day Britain’s misunderstood what American’s were so upset about."

At first, I hesitated to respond to Reeve. Hit and run trolls seldom return to the scene of their mischief. Besides, they’re convinced they’re insightful, not gullible. Wittingly or unwittingly, trolls fly around the internet sprinkling cut and paste propaganda.

It’s true that the Constitution assigned more power to a central government than the weak Articles of Confederation. No one has ever contended otherwise, so it’s specious to use this straw man argument to claim the Constitution bestows infinite power. The Framers wanted a stronger government, but not one with unrestrained power.

Luckily, Reeve proves the point. He argues that “Furthermore, at the time of it’s passage, there was a TON of opposition to it being too centralized.” Yes, indeed. The Antifederalists yelled from the roof tops that the Constitution would create a government so powerful that tyranny was inevitable, while the Federalists reassured people that this was a tightly constrained government with limited powers. Both sides argued for limiting government. Thank you Reeve for confirming the point of the article.

“We the People of the United States, in Order to form a more perfect Union, establish Justice, insure domestic Tranquility, provide for the common defence, promote the general Welfare, and secure the Blessings of Liberty to ourselves and our Posterity, do ordain and establish this Constitution for the United States of America.”

Let’s see. Establish, insure, provide, and then promote. I believe those verbs decline in strength in relationship to the importance of the goals. This was no accident. Gouverneur Morris was a master of the English language. (Unlike Reeve, who doesn’t know the difference between it’s and its.)
But let’s not take my word for it. What did the Father of the Constitution say? James Madison wrote, “With respect to the words general welfare, I have always regarded them as qualified by the details of power connected with them. To take them in a literal and unlimited sense would be a metamorphosis of the Constitution … [that] was not contemplated by the creators."

Reeve brazenly states that “the Constitution does not give specifically listed and enumerated power,” and then says the necessary and proper clause justifies unbridled national power. Perhaps Reeve has never read the Constitution. It grants the power, “To make all Laws which shall be necessary and proper for carrying into Execution the foregoing Powers.” If there are no specifically listed or enumerated powers, what in the world did the Framers mean by foregoing powers?

Generally, Reeve’s rant is standard progressive cant. It is an attempt to dismiss the Supreme Law of the Land by those who object to being constrained from doing whatever they want with governmental powers.