Can Tempest at Dawn be taken seriously?

Tempest at Dawn is a novelization of the Constitutional Convention. As a novel, it is not bound by the rigorous constraints of a nonfiction history book, but it does not deviate from the historical record except for modernizating language, re-sequencing of debates for logical presentation, and attributing a few speeches to a different delegate because that person was already established as a character. It’s confusing to tell a story with more than sixty characters, so I had to choose a representative sample and occasionally attribute to them the words or actions of others.

James Madison’s comprehensive convention notes provided a solid framework for what happened inside the locked doors of the Pennsylvania State House. The events outside the State House occurred, but literary license was used because there were very few recorded details about them. For example, Franklin’s dinner, the John Fitch Steam Boat demonstration, horse races, and George Washington having a carriage built were all outside activities during the convention.  The Fourth of July celebration happened pretty much as portrayed, and delegates did witness a two story house being moved down the street.

Other than speeches, conversations were speculative, but based to a large degree on what must have been discussed in private meetings to shift the votes and opinions expressed in the proceedings.

I spent three years studying the convention and the framers. This chart is one page of a timeline I developed for Tempest at Dawn. This diagram reflects what happened during May, 1787, the first month of the convention. (Each number has extensive hidden notes.) I also develop separate diagrams for each of the following three months, plus similar charts for before and after the convention. My table for the cast of characters stored extensive data about all fifty-five delegates plus a dozen or so outsiders. 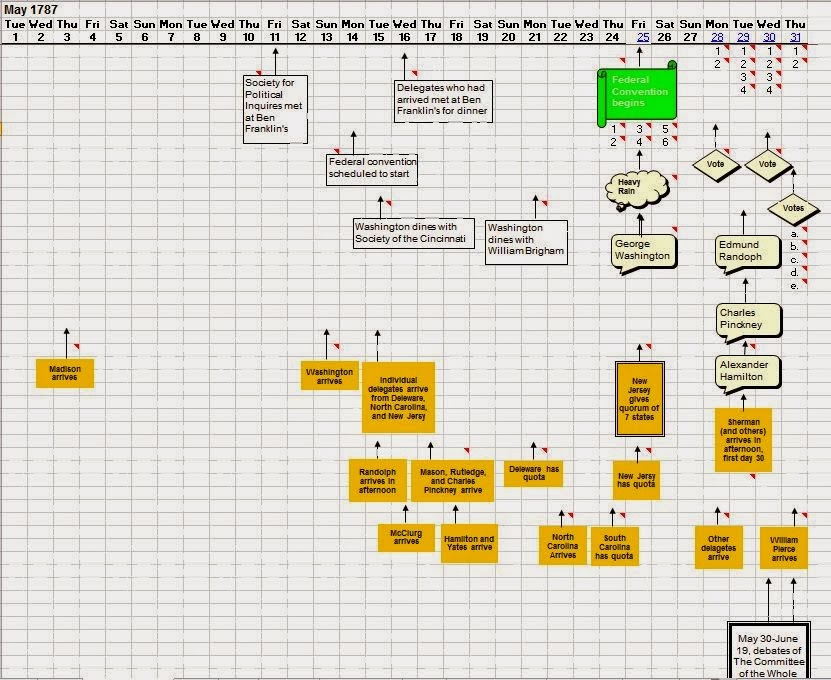 A novel about the Constitutional Convention is more arduous than a nonfiction history book. A history book can concentrate on the convention, but a novel must reflect lifestyles and social norms of eighteenth century America, the technology of the era, how Philadelphia looked and felt in 1787, and most important of all, the personalities of the primary characters of the story. A history book describes what George Washington did, but a novel must capture and reflect his personality. To accomplish this properly requires reading several biographies and the original writings of each of the major character to get a grasp of their personality.

Rather than a novelization, Tempest at Dawn is more a dramatization of the Constitutional Convention. Is it a sole or primary source for understanding the Constitution? Absolutely not.  But hopefully, this rousing and tension-filled story will incent readers to further study this history-shattering achievement.
Posted by James D. Best at 8:04 AM