Time Magazine: “Does It Still Matter?”

“Let us not make it a blank paper by construction. ... If it is, then we have no Constitution.” Thomas Jefferson
“Can it be of less consequence that the meaning of a Constitution should be fixed and known, than a meaning of a law should be so?” James Madison 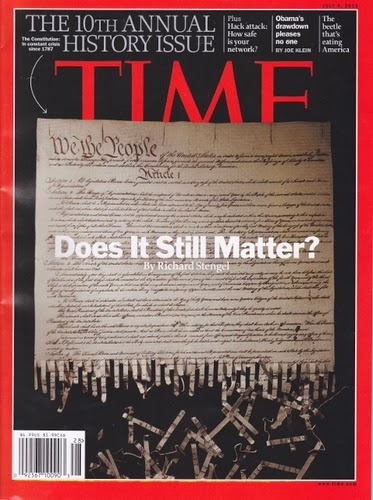 The cover of the 10th Annual Time Magazine History Issue from a couple years ago shows the Constitution being shredded under the title, “Does it still matter?”

This is supposed to be an argument? Is Stengel saying that a constitution can only matter if it anticipates every invention, fad, and world calamity? It’s a good thing he didn’t live in the Age of Reason like the Framers, because they probably would have laughed him out of the Pennsylvania State House. On second thought, the Framers were far more tolerant of alternate opinions. They were also much more learned. They may have been ignorant of Medicare, miniskirts, and collateralized debt obligations, but they knew more about government systems than any other collection of people in world history. By the way, for Stengel’s edification, flights in hot-air balloons were popular, John Fitch brought a steam ship to Philadelphia to show off his invention to delegates, Franklin had made eye-popping breakthroughs in theory of electricity, the Framers were dealing with war bond default of massive dimensions, Macaroni were a fashion rage that could give Lady Gaga a run, and these backward hicks had just defeated the world’s greatest empire in an eight year war.

After representing the Framers as woefully out of date, the Time article denigrates those who try to project what they would think about current events. That doesn’t stop Stengel from writing this final sentence, “”That’s what the framer would say.” I guess it’s just us dullards who are not allowed to channel the Framers.

The Time essay is a specious argument. Constitutions are not lists of laws meant to handle anything a person might encounter. Our Constitution is a distribution of governmental powers and a bill of unalienable rights. Enumerated powers are balanced between the three branches, with each possessing checks on every other branch. All powers not enumerated remain with the people, unless they have been delegated to the states. The Framers understood the weaknesses of politicians and designed a system to hamper the abuse of power. The Constitution defines a governmental system. Within this system, it is the responsibility of Congress or the state legislatures to deal with miniskirts or Lady Gaga, if they need to be dealt with at all.
The Framers philosophy was very simple. Rights are not bestowed by the government, they are “endowed by their Creator” and reside with the people, and liberty depends on government operating within the restriction of enumerated powers delegated by a sovereign people.

Richard Stengel, of course, knows all this. He also understands that the Constitution is a restraining order placed on the government by We the People. Stengel’s intent is to brush aside this restraining order so he and people he admires can tell the rest of us how to live.

If we allow him to succeed, the Framers would be saddened.
Posted by James D. Best at 11:01 AM