Commentary—The Nightmare that is ObamaCare

“It will be of little avail to the people, that the laws are made by men of their own choice, if the laws be so voluminous that they cannot be read, or so incoherent that they cannot be understood; if they be repealed or revised before they are promulgated, or undergo such incessant changes that no man, who knows what the law is to-day, can guess what it will be to-morrow. Law is defined to be a rule of action; but how can that be a rule, which is little known, and less fixed?”—James Madison

Rube Goldberg’s cartoons illustrated insanely complex ways to do simple tasks.  He could have been a congressman. The Affordable Care Act may be the most convoluted and tortuous act ever passed by Congress. It is not a law to resolve an issue; it’s an odd conglomeration of features to garner support or stifle resistance. Political bribes to vote for the bill got stacked on top of each other until they built a leaning Tower of Babel.

The law is so complex that members of Congress didn’t read it, journalist didn’t read it, and even the major architects of the plan never read the complete bill. Nancy Pelosi famously said they had to pass the bill to find out what’s in it. There are nearly half a million words in the bill itself, and government agencies have already issued millions of words enacting regulations. And this doesn’t count the words written to delay, alter, or tweak the plan. And this is only a small fraction of ObamaCare’s 800+ directives to develop and issue regulations. Be prepared for chaos. 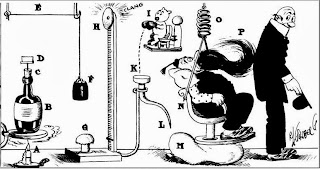 There is a reason few have read the law. It’s incomprehensible. Remember when the Supreme Court ruled on the constitutionality of the individual mandate. As most people understand the mandate, you either have the minimum allowed coverage or you pay a penalty or tax, depending on the day. Here is a snippet of the text for the individual mandate.


DOLLAR LIMITATION.—The amount of the penalty imposed by this section on any taxpayer for any taxable year with respect to all individuals for whom the taxpayer is liable under subsection (b)(3) shall not exceed an amount equal to 300 percent the applicable dollar amount (determined without regard to paragraph (3)(C)) for the calendar year with or within which the taxable year ends.

This is only 63 of nearly 4,000 equally confusing words prescribing the individual mandate alone. Now do you blame Justice Antonin Scalia or Nancy Pelosi for not reading the bill?

The Affordable Care Act is not only convoluted, but intentionally gives enormous, unchecked power to unelected bureaucrats. It’s already making a mockery of its formal title. Good insurance is already becoming less affordable and the bill exposes patients’ sensitive medical issues to government inspection and meddling.

The bill was politically justification by claiming it would cover forty million uninsured and while simultaneously saving the nation $100 billion. (With our exploding national debt, it’s too bad we didn’t have eighty million uninsured.) But of course that was always sales hype. A true calculation of ten-year cost will be far north of $2 trillion. Another smoke and mirror trick was to not include state cost. The national government picks up the first three years of benefit costs for mandated expansions, but in 2017 states begin to shoulder a larger and larger share of these costs. Expect state taxes to skyrocket.

This is a perfectly awful bill. That may be the only perfect thing about it. We could have fixed the most grievous healthcare issues at a tiny fraction of the cost. The Affordable Care Act was never about solving a problem. It was always just a huge power grab. It’s clarifying that the government has shorten the formal title of the act by dropping the first three words of the Patient Protection and Affordable Care Act. After passage, the government dropped the pretense that patients would benefit from the law. So, eat healthy, exercise, and get plenty of rest. An apple a day would be a good idea as well.