The Founders on a Living Constitution

The Founders believed that the Constitution was a legally binding agreement between Americans and their government. What would the Founders think about a living Constitution? Here is what they said in their own words. 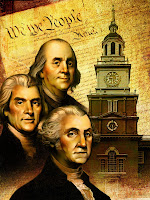 “On every question of construction carry ourselves back to the time when the Constitution was adopted, recollect the spirit manifested in the debates and instead of trying what meaning may be squeezed out of the text or invented against it, conform to the probable one in which it was passed.”—Thomas Jefferson

“The first and governing maxim in the interpretation of a statute is to discover the meaning of those who made it.”—James Wilson, in Of the Study of Law in the United States


“The basis of our political systems is the right of the people to make and to alter their constitutions of government. But the Constitution, which at any time exists, ‘till changed by an explicit and authentic act of the whole people, is sacredly obligatory upon all. … If in the opinion of the people the distribution or modification of the constitutional powers be in any particular wrong, let it be corrected by an amendment in the way which the Constitution designates. But let there be no change by usurpation; for though this in one instance may be the instrument of good, it is the customary weapon by which free governments are destroyed.”—George Washington

“Our peculiar security is in possession of a written Constitution. Let us not make it a blank paper by construction. … If it is, then we have no Constitution.”—Thomas Jefferson

“To take a single step beyond the text would be to take possession of a boundless field of power.”—Thomas Jefferson